It was summer 2012, eight months after my husband Matias started his new design-manufacturing business “Toast” in our 1909 Victorian house, and our home life was a hot mess.

Little baby Toast, started for the love of one perfect, laser-cut, walnut veneer iPhone 4 cover design, was Matias’ utopian dream: a sustainable, socially responsible maker environment to create beautifully-designed objects to enhance daily life.  Even though I had my own gig, I onboarded part-time to help Matias build this worthy vision. 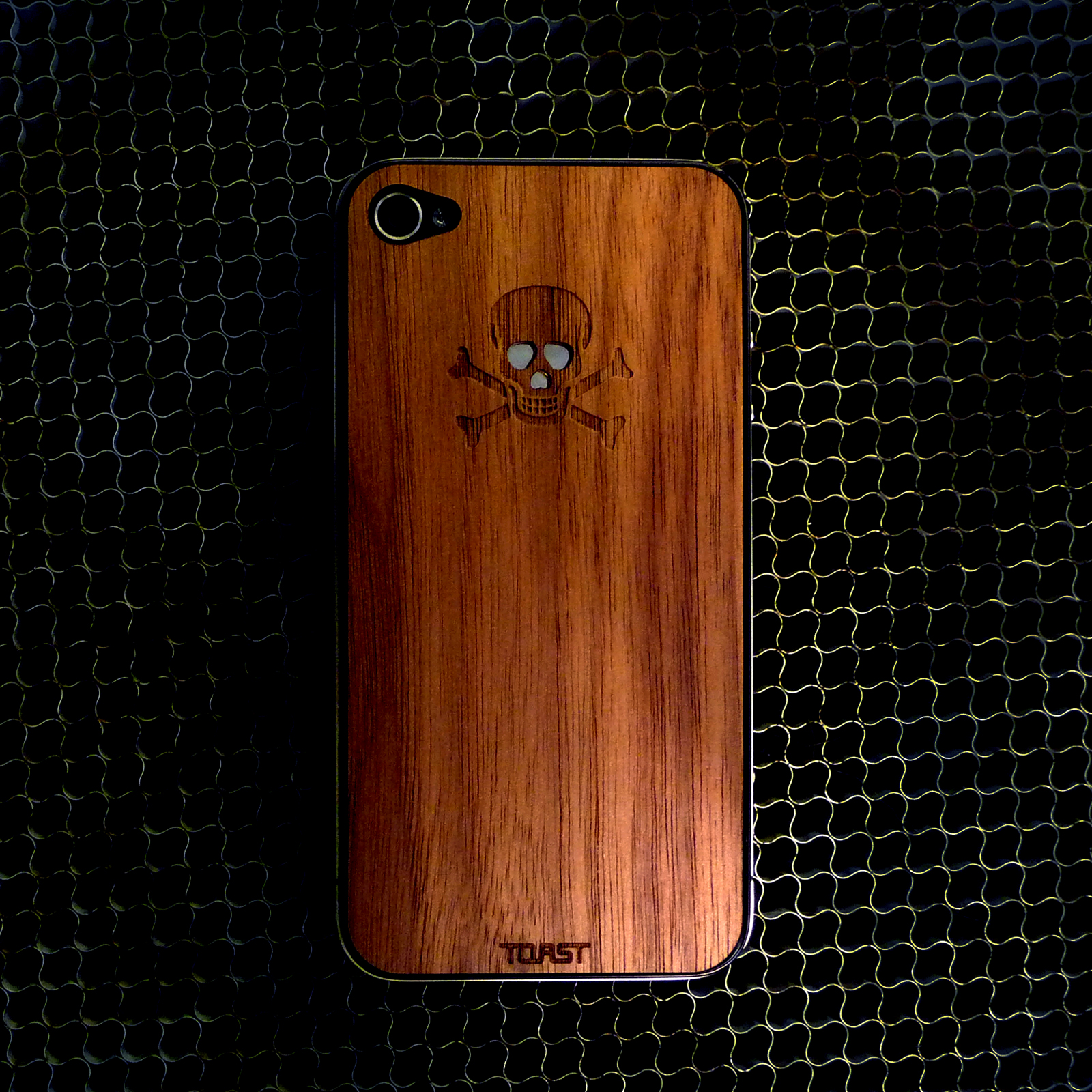 We were psyched that, at last, Toast was gaining enough traction to bring on its first employees.  We didn’t really think through how that meant welcoming these people right into our private, slightly chaotic, not-particularly-clean house.  Overnight, our peaceful home - where previously I could roam freely in my pajamas without a stitch of makeup on or swear like a sailor if I felt the need - was transformed into a hub of newbie employees coming and going at all hours like it was Grand Central Station.  See ya, privacy!

In no time, every inch of our humble abode was noisy, crowded, covered in fine sawdust, and filled with people I barely knew who piled coffee cups in the sink.  Our tiny garage was so dominated by our bulky laser cutter and huge rolls of wood veneer that Andre, our first production trainee, had to hand-sand wood components in our unfinished/unlovely basement, a few feet away from our cats’ litter boxes.  Matias set up makeshift desks for our office helper and packaging/shipping stations in our converted attic, where we constantly bumped our heads on the angled ceilings.  There were awkward traffic jams at the bathrooms.  The novelty wore off pretty quickly. 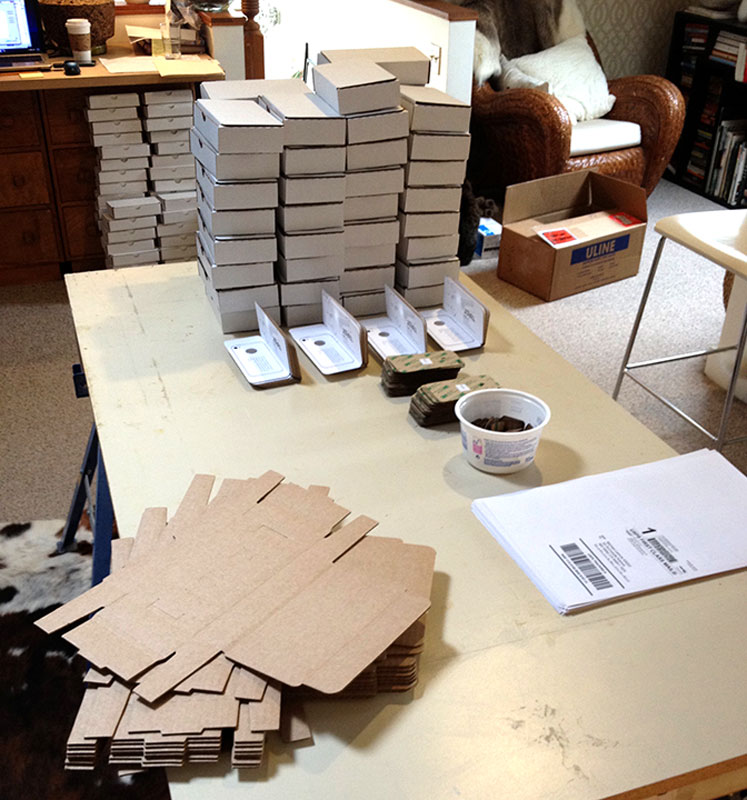 Complicating this was the fact that I already ran a piano teaching business out of our home.  It’s a unique challenge to coach Beethoven with a competing symphony of disk sanders grinding away below, inkjet printers wheezing above, and the phone jangling constantly.  After eight months, I cracked.  It was time for Toast to leave the nest.

So we rented a building: a long, cinder block bunker with a single window at the street end.  We spent epic late nights building it out: walls, doors, bathroom, shelving, storage!  Computers, cables, lights, kitchenette, laser exhaust ducting!  Racks, bins, desks, tools!  Out of necessity, we scrounged everything from the Portland Rebuilding Center and the Habitat for Humanity store.  Let's just say that it could have used a visit from the Fab Five big time.  But it was a miracle nonetheless: spacious (at the time), clean (for a while) and NOT IN OUR HOUSE! 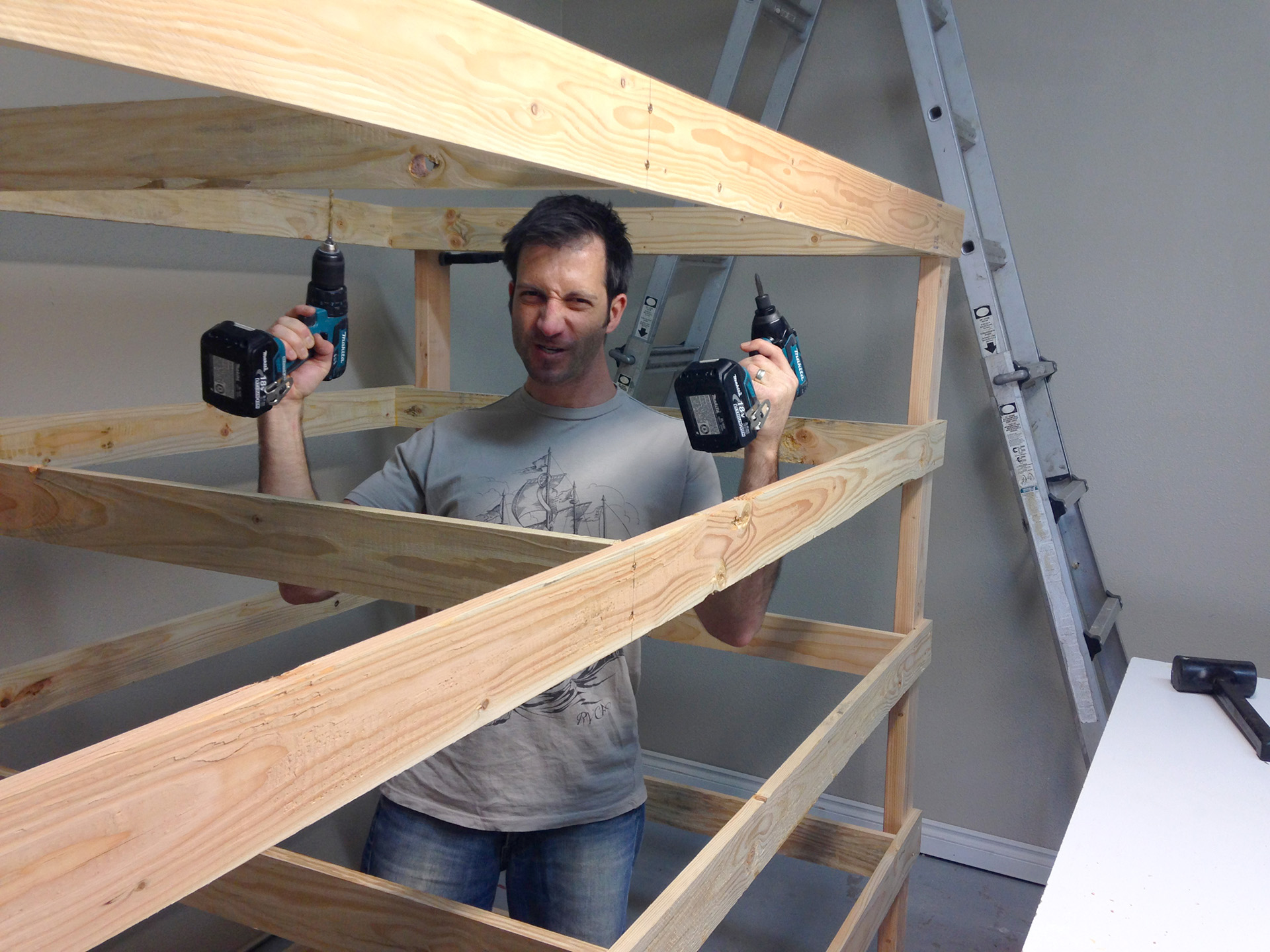 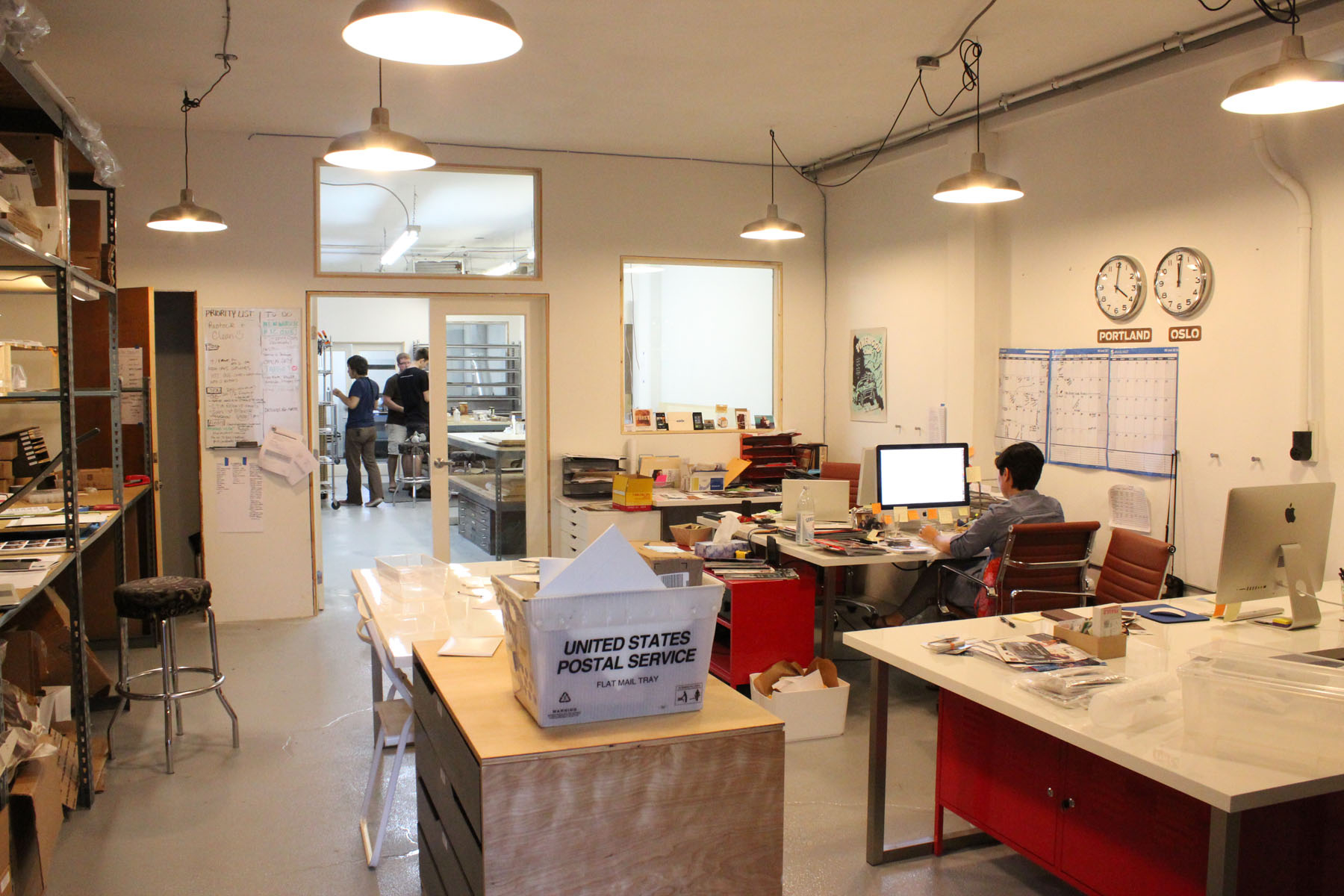 Years passed; Toast grew.  We were shipping orders all over the world, figuring everything out (or not!) as we went.  We invested in a second ginormous laser, then a third, then a fourth.  We expanded, but our little rented box stayed the same; we had to find room for more desks, trade show booths, pallets of bulk packaging, racks to hold wood veneer as the oil finish air-dried.  As a neighbor remarked with amusement, it looked like we were trying to fit ten pounds of sh*t into a five-pound bag.

The math of 11 Toasters vs. one toilet became a complex equation.  Our petite lounge was so crowded with bikes and compost bins that you’d knock over a chair if you backed up to open the microwave.  We dreamed about a space that would be more flexible and fun, more suited to our work flow, with better access to light, fresh air, and green growing things.

So we started looking for a building.  Portland has scads of fantastic old buildings dripping with architectural detail in need of a little love. We fantasized about expansive bow trusses (would we sandblast them down to expose the old-growth fir or paint them white?), 30-foot ceilings (we could hang huge, artful mobiles up there!), and character-full brick walls (hopefully with some bricked-up window holes for extra character!).  We watched every episode ever of Grand Designs, we geeked out making feature lists and designer-y mood boards.

We were no strangers to hard work; we would roll up our sleeves and convert a neglected, historic shell into a modern masterpiece!  Matias happens to be amazing at this stuff.  If we pooled all our resources, we should be able to make it work, right?  It was better than throwing arm-fulls of rent dollars into the wind every month, yes?  Fortune favors the bold, no?

Actually, no.  Fortune favors those with funds.  It didn’t take more than a few meetings with patient yet firm bankers for it to become painfully clear that we should abandon the idea immediately.  The days of cheap, vaulted, charmingly-dilapidated factory buildings in our fair city had gone the way of the dodo.  If you didn’t have millions of dollars to throw around, you were capital-N NOT in the game.  Between structural shoring-up, seismic upgrades, environmental cleanup, weatherization, and everything else it takes to bring vintage buildings up to modern code, explained the bankers, you’d be better off building from scratch.  No historic character, but hey!  Less drafty in winter!  Then they closed the book with a no-nonsense gesture that said, come back when you’ve got some real money.

We were despondent.  Crushed.  Even when you’re pretty well aware that you’re not a player, nobody likes to be told they’re not a player.  And it didn’t take long to discover that empty, build-able lots in Portland were just about as common as pygmy unicorns.  We went back to our dark little bunker, where the paint had started peeling in the ventless bathroom and the floors had become sticky with gnarly adhesive grime that refused to come off.  On many of my Toast days, the hot desk was taken by our part-time accountant or a computer was broken, which meant that I had to work on the backup server.  In the supplies closet. 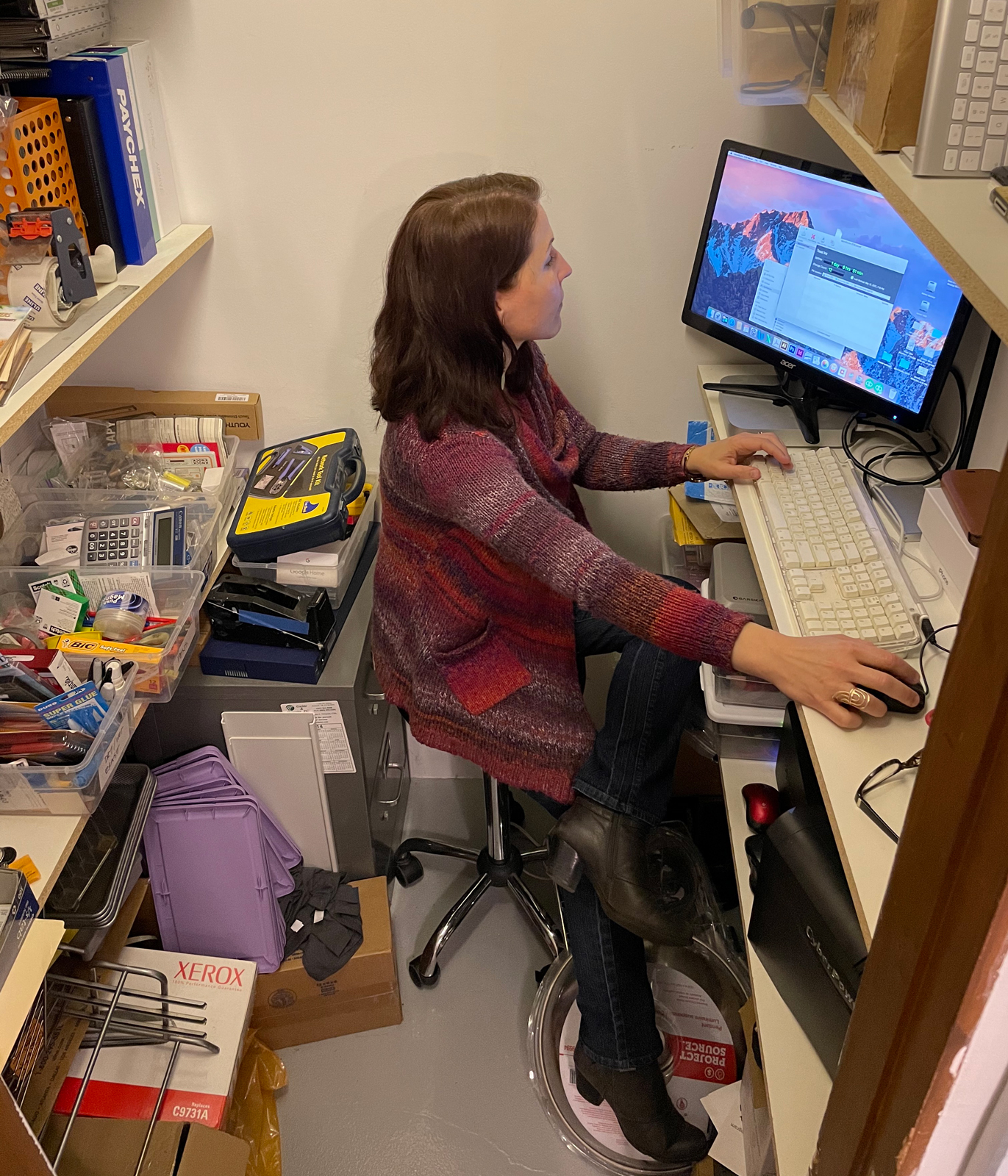 Then Matias stumbled on a listing for an empty lot in North Portland on Craigslist.  It was a skinny strip of blackberry brambles shoehorned between a doggie daycare and a massive, corrugated, baby-blue metal-fab garage that stored stacks of vending machines along the graffiti-covered chain-link fence.  It was one heck of an ugly duckling.  So ugly we could almost afford it.

It is entirely possible that we weren’t thinking clearly.  Maybe we didn’t fully realize how the loss of one dream can transmogrify into a new one with unexpected speed and power.  Within hours, we had contacted a realtor who kept his phone on over weekends and who wasn’t bothered by the fact that he didn’t know us from Adam.  We had an offer in the next day and spent the intervening sleepless night contemplating how precariously thin the line is between a mad leap of faith that might blossom into a glorious success...and a terrible, horrible, very bad idea.

Somehow, we got it.

We thought: This is it!  We have arrived! 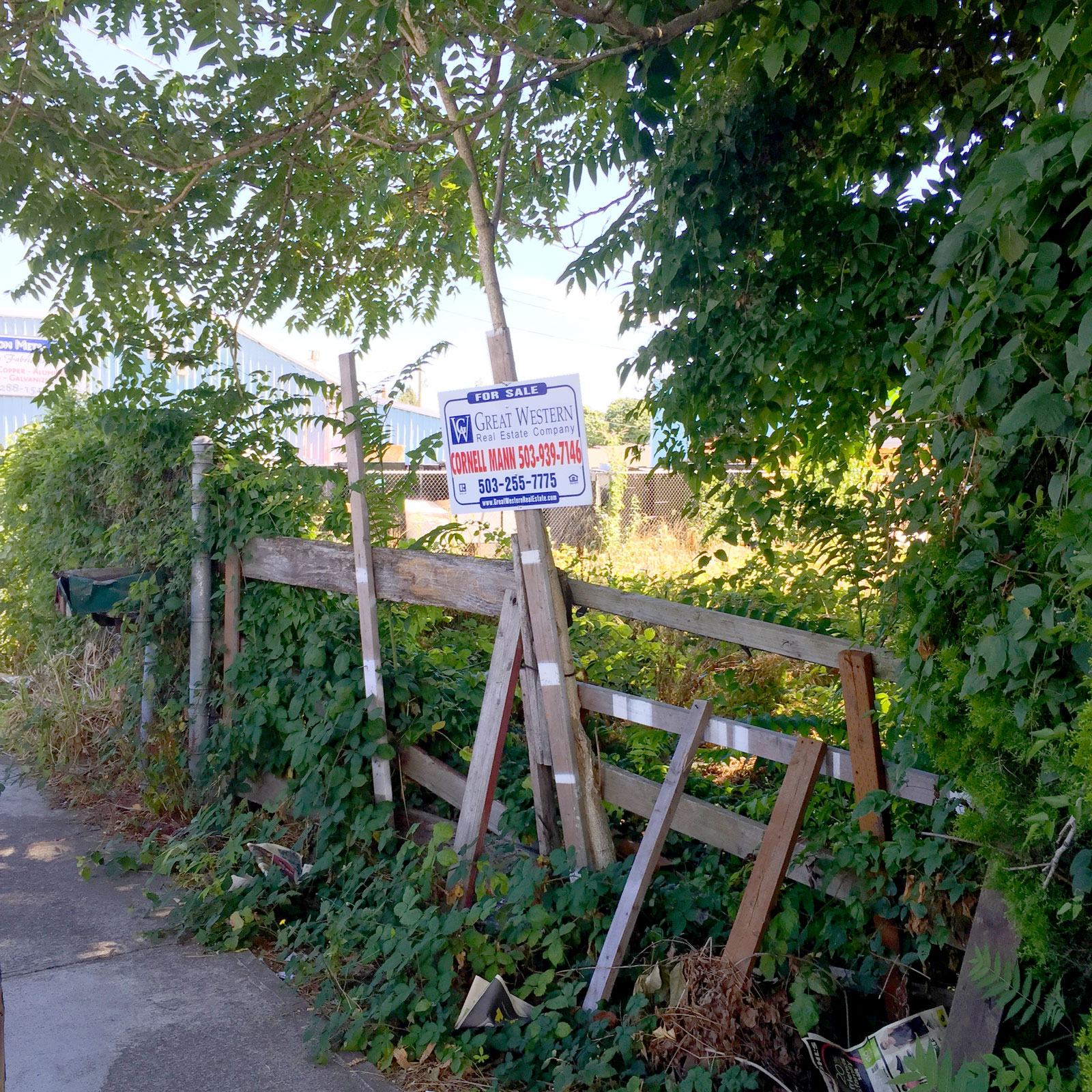 Little did we know that was only the very beginning.